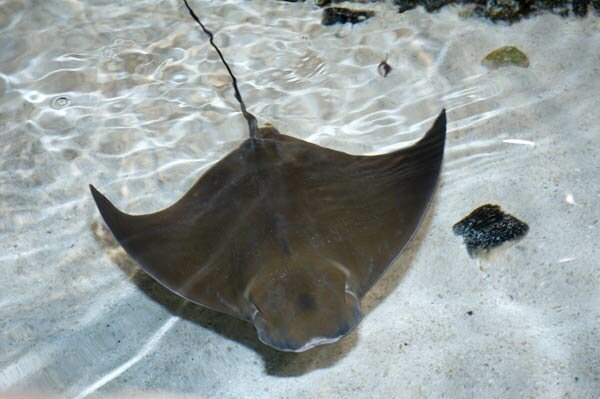 In this 900 gallon interactive tank you have the opportunity to touch some of our juvenile rays. These include Cownose and Bat Rays. Special feeding times 12 & 3 PM daily give you the chance to help us feed them!. Limited quantities of food are sold at the gift shop for scheduled feedings. 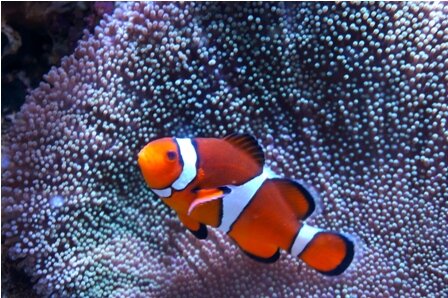 This tank is home to different species of clownfish including Ocellaris (like in Finding Nemo), Clarkii, Maroon, and Tomato clowns. Sharing the tank with them are symbiotic Long Tentacle and Bubble Tip Anemones. The clownfish brings food to the anemone in exchange for protection. Most organisms that come into contact with the anemone are paralyzed by the stinging cells from the anemone's tentacles but the Clownfish is one organism that is able to live within the anemone without being eaten or stung. It develops immunity to the anemone and the clownfish must therefore remain with that same anemone for the rest of its life. 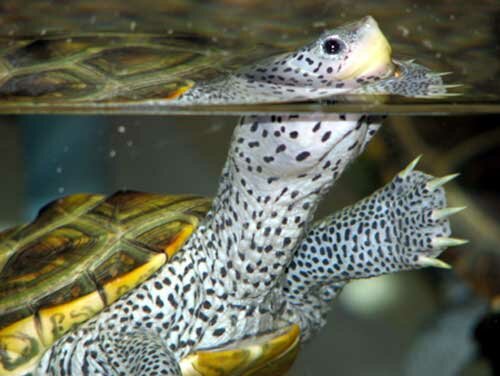 Typical of the local estuarine environment, the water in this tank is brackish, meaning that it is a mix of fresh and salt water. Fish such as Perch and Killifish are able to live in both, as does the Diamondback Terrapin. The Diamondback Terrapin get their name from the diamond-shaped growth rings on the back of its shell. In the early 1900s, Diamondbacks were a popular gourmet food. Their numbers declined due to unregulated harvesting and habitat loss through coastal development which then put them on the endangered species list. Thankfully, they are on the rebound due to conservation projects. The Terrapins now have a safe territory here at the Aquarium! 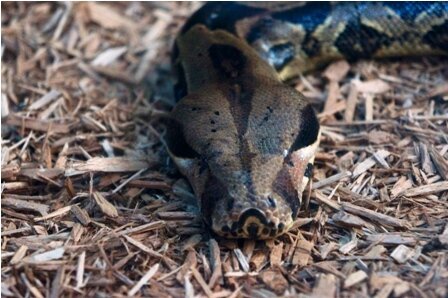 Guests can get up close to some of the Aquarium’s more unusual inhabitants. During this twenty minute presentation you will see a variety of animals which could include a 6 foot Boa, a Bearded Dragon Lizard, or a Tarantula, just to name a few! Aquarium handlers discuss the animal’s native habitats, their sustainability as pets, natural defenses and predatory instincts along with other interesting facts. Throughout the show, everyone will have the opportunity to ask questions. This show can be viewed in front of the Mid-Atlantic Tank at 2 PM. 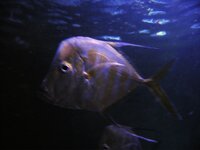 Fish of the Mid-Atlantic Ocean

This 25,000 gallon exhibit features a variety of sea life native to the waters off of NJ, and the rest of the Mid-Atlantic region. The inhabitants all ranging in size, include Cownose rays, a Southern Stingray, Smooth Dogfish, Lookdowns, and Black Sea Bass; just to name a few and don’t forget Groman, our Loggerhead Sea Turtle. 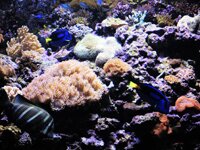 This 1,000 gallon exhibit contains a mixture of stony and soft corals native to both the Caribbean and Indo-Pacific. While corals may appear to be little more than stone or plants, these are in fact live animals related to jellyfish and sea anemones. Plants do play a very important role in the lives of corals though, most notably the endosymbiotic algae called zooxanthellae (ZOH-oh-ZAN-thell-ee) that live in their tissues. These single celled plants convert sunlight into energy that the corals use to grow, hence insuring a healthy coral polyp and colony overall. Coral reefs teem with life, covering less than one percent of the ocean floor, but supporting about 25 percent of all marine creatures. 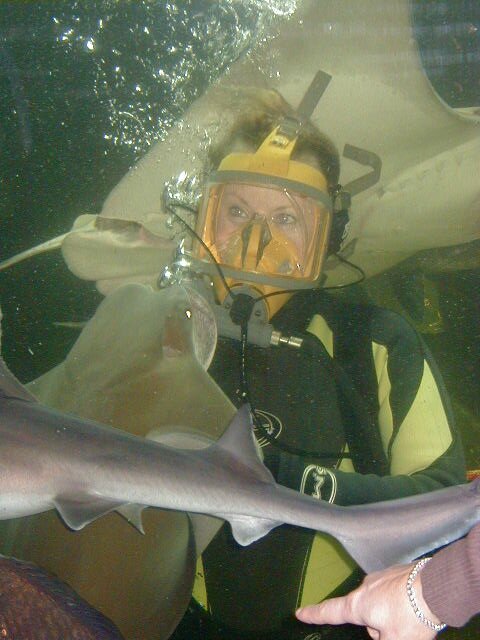 The Live Diver Feeding Show features one of the aquarium’s divers in the 25,000 gallon “Fish of the Mid-Atlantic” tank. The audience can watch and interact with the diver as they hand-feed Cownose rays, Smooth Dogfish and the other residents of the tank. Also, be on the lookout for our Loggerhead Sea Turtle, Groman! The audience will also have the opportunity to interact with the diver by asking questions during the show. This show is included with paid admission to the aquarium and starts at 11 AM  Daily July and August, Weekends only September - May. 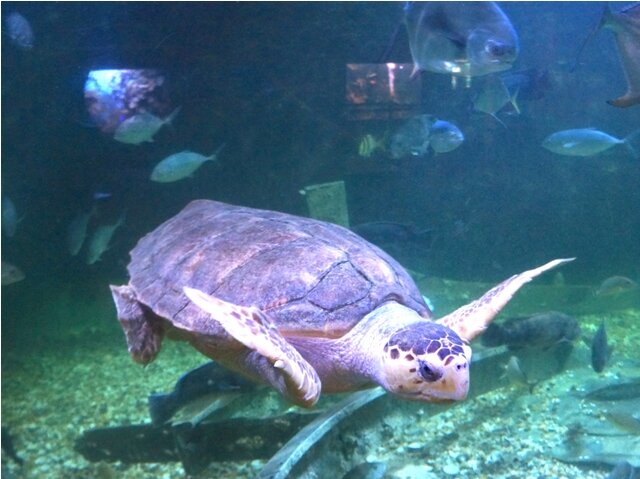 In our Fish of the Mid-Atlantic Ocean Exhibit, you will find our Loggerhead Sea Turtle named Groman. The loggerhead sea turtle is perhaps the most common of the sea turtles and the only one that still regularly nests on the U. S. Atlantic Coast, on beaches from New Jersey to Texas.The highest populations in North America are found on barrier islands from North Carolina to the Florida Keys. This reddish-brown turtle averages 3 feet in length and weighs around 300 pounds. Their smooth shells and paddle-like flippers help move swiftly through the water at speeds up to 14 mph. Although sea turtles cannot withdraw their heads into their shells, the adults are protected from predators by their shells, large size and thick scaly skin on their heads and necks. The loggerhead sea turtle's powerful jaws are well suited to eating hard-shelled prey. They feed on crabs and other crustaceans, mollusks, jellyfish and sometimes fish and eelgrass. Sea turtles spend almost all their lives submerged but must breathe air for the oxygen needed to meet the demands of vigorous swimming activity. Male sea turtles almost never leave the ocean whereas females only leave to lay eggs, primarily at night. The Loggerhead Sea Turtle is currently listed as “Threatened” on The United States Fish and Wildlife Service Endangered Species List and are now listed as “Endangered” on the IUNC Red List of Threatened Species. 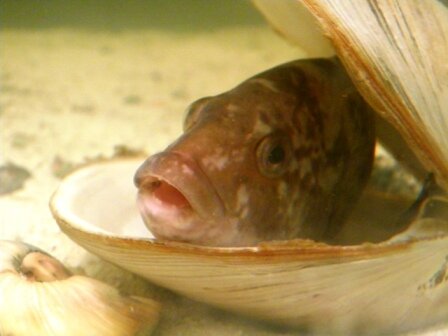 The Intertidal Zone is an area of the shore that is alternately submerged and exposed by tides, basically where the land and sea meet. This presents a unique set of challenges for the organisms that live there. Extreme fluctuations in moisture level, heat, salinity, and sunlight make it a habitat suitable for only a few species. In this interactive exhibit we encourage our visitors to touch a variety of local intertidal organisms. Here you can expect to find horseshoe crabs, sea urchins, and hermit crabs to name a few. There are also several species of small and juvenile fish that roam this shallow tank.

Jellyfish are commonly known to be a potentially hazardous animal, with their capability to inflict painful stings. What isn’t as widely known is just how diverse this group is. Jellies can be large, like the Lion’s Mane Jelly, or so small as to nearly be invisible, like some of the very small and potentially deadly box jellies of the South Pacific. The Moon Jellies in this display get up to the size of a dinner plate and are relatively harmless to humans due to their small stinging cells, unless found in large numbers.

In this tank you can view our moray eels. While many people are familiar with the green moray, like the one in this display, moray eels come is a range of sizes, colors, and patterns. The dark green to brown color of the green moray eel comes from a yellowish mucous that covers its blue skin to provide protection from parasites and infectious bacteria. Additionally, they are often camouflaged to hide in the reef from unsuspecting prey. 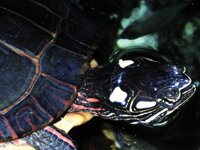 Within the Pine Barrens there are four major river systems one of which is the Mullica River. The Mullica River is about a 50 mile- long river in southern New Jersey. The river provides one of the principal drainages into the Atlantic Ocean of the extensive Pinelands (Pine Barrens). It’s estuary on Great Bay is considered one of the least-disturbed marine wetlands habitats in the northeastern United States. One of the unique qualities of typical Pine Barren Rivers is the unusual brown appearance of the water. This color is the result of the water containing a high content of iron and by natural vegetative dyes such as tannin. Our Mullica River Tank is a freshwater tank that is typical of local cedar-water tributaries of the Pine Barrens. This tank houses a few species of freshwater turtles and fish.

The ocean contains untold numbers of strange and bizarre creatures and some of them are here for you to see! We showcase some of the interesting, and unusual organisms from oceans around the world. These exhibits are rotated occasionally, with new habitats and animals, but will always have something odd on display. 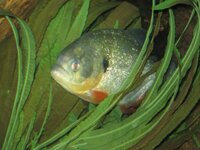 The Amazon River has the greatest freshwater output of any river in the world, and is home to an incredible diversity of life. Our exhibit is much smaller, but it does provide a glimpse at some of the fish species native to the Amazon. Most notably the Red Bellied Piranha, one of the approximately 30 species of piranhas only found in the Amazon River basin. 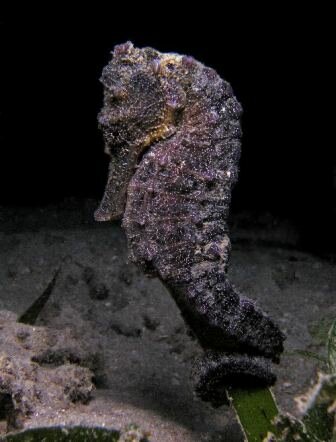 While many people are only familiar with the classic appearance of seahorses, these very unique fish come in a variety of shapes, sizes, and colors. These fish are anything but ordinary, with heads like horses, tails like a monkeys and pouches like kangaroos. They are also the only member of the animal kingdom where the male gets pregnant and gives birth!   In addition, they are masters of camouflage, easily blending into their surroundings. This exhibit shows one of the many familiar looking species of seahorse, and just how easily they can become lost in the background of their environment.

Get up close and personal with sharks! In our Tropical Shark Touch Tank you have the opportunity to touch Whitespotted Bamboo Sharks, Marbled Sharks and Epaulette Sharks. These species of sharks are found mostly in the tropical waters of the Pacific Ocean. They are all members of the Catshark Family which are bottom dwelling species. A notable characteristic of these sharks are the whiskers or barbels on their mouths which help them locate food that may be buried. In addition to our sharks we have invertebrates that include a Sea Star that resembles a chocolate chip cookie!

Rainforests cover 6% of earth’s surface but house over half of the worlds plant and animal species. Rainforests are very dense, warm, wet forests. They are havens for millions of plants and animals. Rainforests are extremely important in the ecology of the Earth. The plants of the rainforest generate much of the Earth's oxygen. These plants are also very important to people in other ways; many are used in new drugs that fight disease and illness. In our tropical rainforest exhibit you can find animals such as Chameleons, Tree Frogs, and the Mata Mata Turtle.